50 REASONS WHY MUHAMMAD WAS NOT A PROPHET 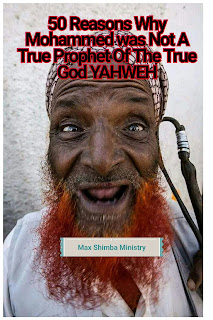 Why should the entire world reject Muhammad as a prophet? Here are 50 reasons:

1. When Muhammad began receiving revelations, his first impression of these revelations was that they were demonic.

2. Muhammad was so traumatized by his encounter with "Gabriel" that he repeatedly tried to commit suicide by hurling himself off a cliff.

3. According to Muslim sources, Muhammad once delivered a revelation from the devil (the "Satanic Verses").

4. Muhammad claimed that he was a victim of a magic spell that gave him delusional thoughts and false beliefs.

5. Islam promotes idolatry (e.g., bowing down to the Kaaba and kissing the black stone).

7. Islam deifies Muhammad by requiring unconditional obedience to him and by requiring Muslims to talk to him during their daily prayers.

8. After leaving Mecca, Muhammad supported his religion by robbing people.

9. Muhammad ordered his followers to torture a man named Kinana to find out where some money was hidden. Muhammad then had Kinana killed, and took his wife for himself.

10. Muhammad commanded his followers to kill critics of Islam.

11. Muhammad ordered his followers to kill apostates, even if they had good reasons for leaving Islam.

12. The Qur'an commands Muslims to violently subjugate Jews and Christians.

13. The Qur'an claims that stars are missiles that Allah uses to shoot demons.

14. The Qur'an claims that the sun sets in a pool of murky water.

15. Muhammad's teachings about personal hygiene would lead to death if Muslims took them seriously.

16. Muhammad claimed that Gabriel explained to him why children look like one parent or the other. Gabriel's answer is completely false.

17. When Muhammad was too shy to tell his dinner guests to leave, Allah stepped in with a special revelation that should make everyone wonder whether Muhammad's revelations really have anything to do with God.

19. In the Qur'an, Allah promises to kill Muhammad by severing his aorta if Muhammad invents a false revelation. When Muhammad died, he said he could feel his aorta being severed.

20. The Qur'an contains a prophecy that wasn't fulfilled.

21. The Qur'an presents a test for divine inspiration, but fails the test.

22. The central argument for the inspiration of the Qur'an is the "Argument from Literary Excellence," which is absurd on multiple levels.

23. The author of the Qur'an doesn't know that Miriam, the sister of Aaron and Moses, is a different person from Mary, the mother of Jesus (because their names are the same in Arabic).

24. The Qur'an claims that Alexander the Great and Aesop were devout Muslims.

25. Allah promises to protect the Qur'an from corruption, but the Qur'an has been corrupted (by Muslim standards).

27. The Qur'an is missing at least two verses in which Allah commands grown women to breastfeed grown men in order to prevent sexual misconduct.

28. The Qur'an contains numerous false stories that were plagiarized from other sources.

30. The Qur'an allows Muslim men to have up to four wives at a time. But Muhammad received a special revelation giving him (and him alone) the right to break the four-wife limit.

31. Muhammad had sex with a prepubescent nine-year-old girl named Aisha.

32. The Qur'an allows Muslim men to beat their wives into submission.

34. Muhammad married the divorced wife of his own adopted son (after Muhammad caused the divorce), and the Qur'an offers an absurd defense of Muhammad's actions.

35. When Muhammad's wife Sauda became fat and unattractive, Muhammad intended to divorce her. Sauda had to relinquish some of her marital rights to avoid being abandoned.

37. Muhammad claimed that women are less intelligent and less moral than men.

38. When Muhammad's wives asked why he was giving special privileges to Aisha, he justified his actions by saying that he received revelations while wearing Aisha's dress!

39. According to the Qur'an, Allah has no love for unbelievers.

40. According to the Qur'an, Allah is the "best of deceivers."

41. According to Muhammad, Allah wants people to sin, and he threatens us with annihilation if we refuse to sin.

42. Since Allah would destroy us for not sinning, the true savior of humanity, according to Islam, is Satan, who tempts human beings to sin and therefore protects us from being destroyed.

43. Muhammad didn't know whether he would go to heaven or hell when he died.

44. Islam teaches that Allah will punish Jews and Christians in hell for the sins of Muslims.

45. Muhammad promises his followers a paradise in which Allah will bless them with eternal erections so that they can continually deflower their virgins.

46. Islam affirms the inspiration, preservation, and authority of the Jewish and Christian scriptures, yet Islam contradicts these scriptures on a fundamental level.

47. Islam claims to respect and honor Jesus, yet it portrays him as a complete failure.

48. Muslims believe that the Gospel has been corrupted. But according to Islam, part of the Gospel was corrupted by Allah himself.

50. Christianity is confirmed by Jesus' resurrection from the dead. Since Islam contradicts Christianity, and has no comparable confirmation from God, we must reject Islam.