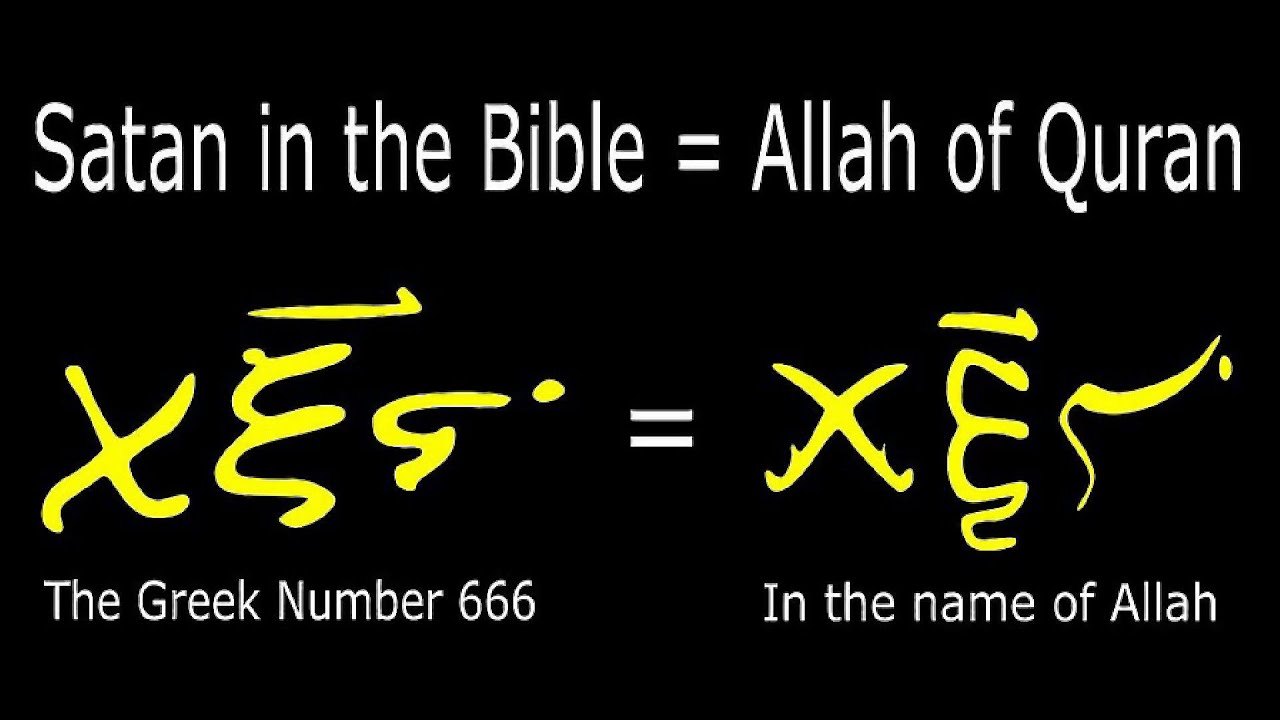 According to the Bible, Allah is Satan. Qur’an 1:1 indicates that Muslims worship the god of this world who is Satan who is known as the best deceiver and who leads people astray.
Let us look at what both the Bible and the Qur’an say to prove this point.
Qur’an 1:1 states that Allah is the god (lord) of this world:
1The praise be to Allah, the lord of the worlds. Allah is Satan as it is written throughout the Qur’an. The Bible states in 2 Corinthians 4:4 that the god of this world is Satan: In whom the god of this world hath blinded the minds of them which believe not, lest the light of the glorious gospel of Christ, who is the image of God, should shine unto them.
Both verses in Qur’an 3:54 and 8:30 state that Allah is the best deceiver:
And they deceived, and Allah deceived. And Allah is the best deceiver. What does the Bible say about this? Revelation 20:10 tells us: And the devil that deceived them…
Qur’an 35:8 states that Allah leads people astray:
8…So surely Allah leads astray whom he wills and guides whom he wills. Does God lead people astray? No. Then who does the Bible say wants to lead people astray and keep them from having eternal life through Jesus Christ? Satan leads people astray. 1 Peter 5:8 tells us that Satan walks about as a roaring lion seeking whom he may devour, and Revelation 12:9 states: The great dragon was hurled down—that ancient serpent called the devil, or Satan, who leads the whole world astray…
Qur’an 38:85 and 11:119 both state that Allah desires to fill hell with people:
85…surely I will fill hell from you and from those who followed you from among them together. 119 …“I will surely fill hell with the jinn and the people together.”
What does the Bible say about people?  God wants us to be with Him in heaven. He even sent His Son, Jesus, to die on the cross to pay for our sins so that people can have a way to live eternally in heaven with Him.  He does not want any to perish. John 3:16 states:
For God so loved the world, that he gave his only begotten Son, that whosoever believeth in him should not perish, but have everlasting life.
More characteristics of Allah
Allah is not God because Allah is proud. Qur’an 59:23 states:
23He is Allah. There is no god except him… the proud. But the God of the Bible is meek and lowly in heart. Matthew 11:29 states: Take my yoke upon you, and learn of me; for I am meek and lowly in heart….
Allah is a seditionist. Qur’an 25:20 states:
20…and we made some of you to be a sedition to some others…
Allah is a seducer. Qur’an 11:34 states:
34And my advice will not profit you, if I desire to advise you, if Allah was desiring to seduce you….
Allah is abominable. Qur’an 10:100 states:
100And it was not for a soul to believe except by Allah’s permission, and he will lay the uncleanness on those who will not understand…
Allah is wrathful. Qur’an 2:59 states:
59So those who were unjust changed the saying to what had not been said to them, so we sent down on those unjust a wrath from the heaven because they were transgressors.
See also Qur’an 7:162.
Allah is a misleader. Qur’an:4:88 states:
88…And whomever Allah leads astray, so you will not find for him a way.
But the God of the Bible is a true leader. See Proverb 3:5-6.
Allah is a schemer. Qur’an 68:45 states:
45…surely my scheme is firm. Also Qur’an 86:16 states: 16and I am scheming a scheme.
Allah spreads hate. Qur’an 5:14 states:
14…so we have stirred up enmity and hatred among them….
The more we read the Qur’an, the more we know that Allah is Satan.
If you would be interested to invite us to speak at your church or community or to learn more about Islam, please visit our website at www.thestraightway.org.
at August 04, 2018