Somali Muslim leader turns preacher of the gospel. In Somalia, converting to Christianity is punishable by death. 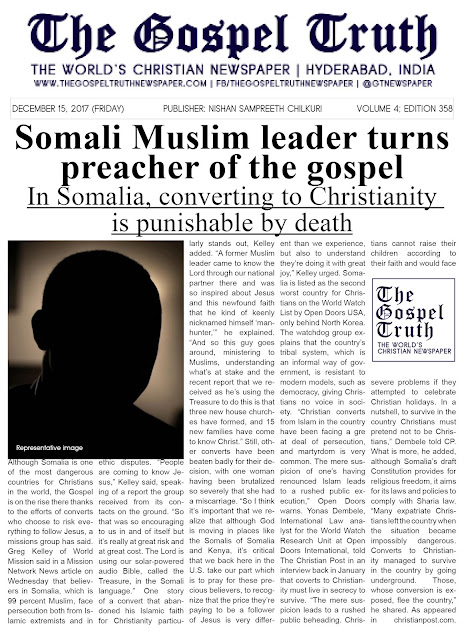 Somali Muslim leader turns preacher of the gospel.
In Somalia, converting to Christianity is punishable by death.

Although Somalia is one of the most dangerous countries for Christians in the world, the Gospel is on the rise there thanks to the efforts of converts who choose to risk everything to follow Jesus, a missions group has said. Greg Kelley of World Mission said in a Mission Network News article on Wednesday that believers in Somalia, which is 99 percent Muslim, face persecution both from Islamic extremists and in ethic disputes. "People are coming to know Jesus," Kelley said, speaking of a report the group received from its contacts on the ground. "So that was so encouraging to us in and of itself but it's really at great risk and at great cost.

The Lord is using our solar-powered audio Bible, called the Treasure, in the Somali language." One story of a convert that abandoned his Islamic faith for Christianity particularly stands out, Kelley added. "A former Muslim leader came to know the Lord through our national partner there and was so inspired about Jesus and this newfound faith that he kind of keenly nicknamed himself 'manhunter,'" he explained. "And so this guy goes around, ministering to Muslims, understanding what's at stake and the recent report that we received as he's using the Treasure to do this is that three new house churches have formed, and 15 new families have come to know Christ." Still, other converts have been beaten badly for their decision, with one woman having been brutalized so severely that she had a miscarriage.

"So I think it's important that we realize that although God is moving in places like the Somalis of Somalia and Kenya, it's critical that we back here in the U.S. take our part which is to pray for these precious believers, to recognize that the price they're paying to be a follower of Jesus is very different than we experience, but also to understand they're doing it with great joy," Kelley urged. Somalia is listed as the second worst country for Christians on the World Watch List by Open Doors USA, only behind North Korea.

The watchdog group explains that the country's tribal system, which is an informal way of government, is resistant to modern models, such as democracy, giving Christians no voice in society. "Christian converts from Islam in the country have been facing a great deal of persecution, and martyrdom is very common. The mere suspicion of one's having renounced Islam leads to a rushed public execution," Open Doors warns. Yonas Dembele, International Law analyst for the World Watch Research Unit at Open Doors International, told The Christian Post in an interview back in January that coverts to Christianity must live in secrecy to survive.

"The mere suspicion leads to a rushed public beheading. Christians cannot raise their children according to their faith and would face severe problems if they attempted to celebrate Christian holidays. In a nutshell, to survive in the country Christians must pretend not to be Christians," Dembele told CP. What is more, he added, although Somalia's draft Constitution provides for religious freedom, it aims for its laws and policies to comply with Sharia law. "Many expatriate Christians left the country when the situation became impossibly dangerous. Converts to Christianity managed to survive in the country by going underground. Those, whose conversion is exposed, flee the country," he shared. As appeared in christianpost.com.