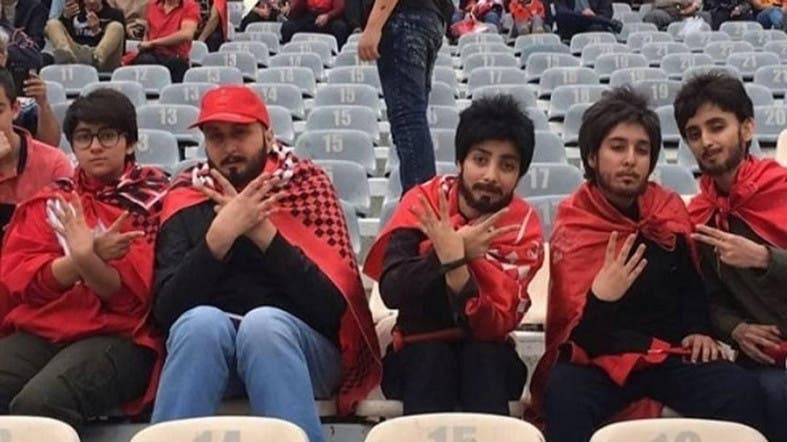 A group of Iranian female soccer fans used false beards to challenge a ban on women’s presence in football matches and managed to enter the stadium and encourage their team to win a local league tournament.
Video clips and a wide variety of photos were posted on the websites showing these five young women cheering the names of their favorite players, while wearing wigs and false beards.
The girls were fans of Perspolis, one of the most prominent teams in Tehran, which had already won the professional championship and won the trophy after the match against the Spidrod Rasht scoring three goals.
The girls carried red flags of Persepolis and raised six fingers to the cameras, a gesture that is very popular among the fans of the team supporting the club to repeat one of the most famous results, 6-0.
One of the girls, called Zahra, spoke to a local sports newspaper. She said that there were eight members of the group and had made similar attempts to enter the stadium earlier.

However, because of the poor quality of their beards and bad make-up and hair they were identified at the gates and were thrown out.
Since then, many girls have devised ways to enter stadiums, where women have been banned from attending men’s football matches since the 1979 Iranian revolution.
In late January, Iranian websites circulated picture of a girl who had dressed as man and at the Azadi stadium in Tehran to attend a match between the Independence and Paras.
Another girl disguised herself as man, then put on makeup and painted a moustache and a beard on her face.
She was able to enter the stadium with ease and cheer her team, Peruzi Tehran, which was playing against Ahwaz Folaz Khorasan on 24th of December.
Photos of her cheering for her team from inside the stadium had also gone viral.
Last Update: Tuesday, 1 May 2018 KSA 15:05 - GMT 12:05
at May 02, 2018