Muslim suspect, may have link with JMB, held after huge explosives recovered from his house at Nalhati in Birbhum district of West Bengal.

A huge amount of explosives, including 11,000 gelatin sticks and 50,000 detonators along with 110 quintal sacks full of ammonium nitrate, have been recovered from Nalhati in Birbhum district of West Bengal. One Muslim, named Anarul Sheikh,  has been detained and two vehicles have been seized by the police.Recovery of detonator and gelatin sticks was nothing new [1] [2] in the region dotted with stone quarries. However, the smuggled explosives were allegedly used by a section of stone mine owners. As the area is very close to Jharkhand border, police didn’t rule out other possibilities as well.
Police, NIA and other agencies uncovered JMB networks in Birbhum during the investigations related to Khagragarh Blast in Burdwan in 2nd Oct, 2014.
The Communal Tension in Birbhum including Jihadi activities in the district frequently give trouble to the police and general administration in a routine manner.

Acting on a tip-off, policemen from Nalhati Police Station reached Muslim populated Bahadurpur area.
The cops noticed a vehicle loaded with huge white sacks late last night. They saw two Muslim men unloading the sacks and taking them into a house.
When the police asked them to open the sacks, they fled. Then, the cops detained a person called Anarul Sheikh, the owner of the house, where the explosives were being stored.
After opening the sacks, police found 11,000 gelatin sticks and 50,000 detonators and a huge quantity of ammonium nitrate.
Police sources said though there are many stone quarries in the area; but, such huge amount of detonators, gelatin sticks and chemicals are not needed for blasts.
Police is still interrogating Anarul Sheikh while a search is on to find the other two men, who are absconding.
The police have started investigating why such huge quantity of explosives were stored in Anarul’s house.
The village, where explosives have been seized, is surrounded by a number of stone quarries and crushers. Police Superintendent of Birbhum N Sudheerkumar told media persons,” Around 55000 pieces of detonators, 11,000 pieces of gelatin sticks and huge amount of ammonium nitrate were recovered. Two vehicles detained and one person has been arrested. We have started investigations to trace the source of the illegally smuggled explosives and why those were stocked in that place.” 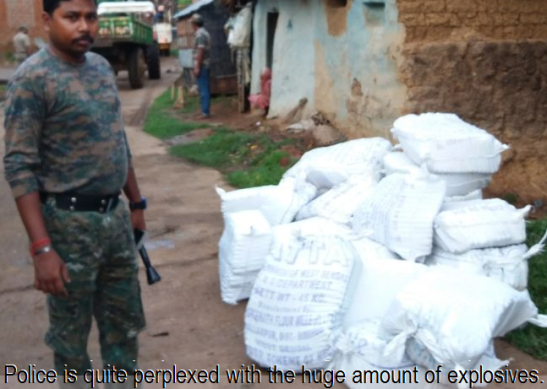 Some Islamic organisations in the district linked to JMB always try to dismantle the peace and harmony to perpetuate their Jihadi agenda against Hindus.
In that context, police is searching any relation of JMB (Jamaat–ul–Mujahideen Bangladesh) or other Jihadi organisation with arrested Anarul Sheikh in connection with the recovery of huge explosives from Nalhati, the highest in recent times.
Police is quite perplexed with this recovery of huge amount of explosives.