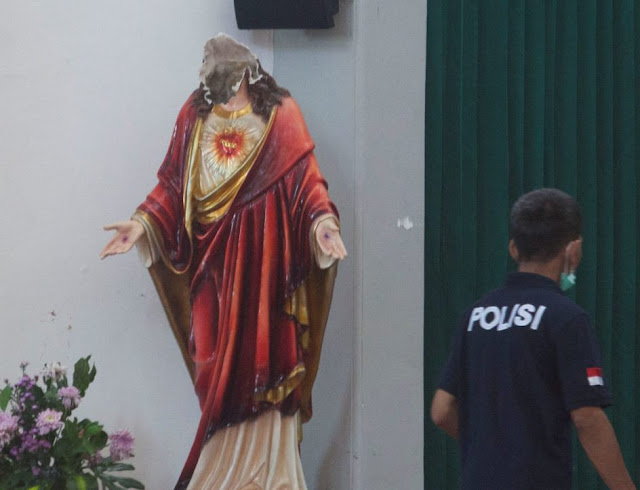 IT BEGAN AS an ordinary Mass, Feb. 18, 2018 at St. Lidwina Catholic Church in the Yogyakarta region of Java, the main island of Indonesia. The pews were full.
The celebrant that day was German-born Father Karl-Edmund Prier, S.J., a liturgical music expert who has lived in Indonesia since 1964. Father Prier regularly says Mass at St. Lidwina Church, which is part of the Archdiocese of Semarang.
The people had just finished singing the Kyrie, when suddenly a young man—a Muslim, it turned out afterward—entered the church. He walked toward the altar, shouted out and drew a long sword, which he swung toward the congregation.
Father Prier tells the story: "At that moment, the culprit walked up to the altar, shouting, swinging his long sword. After entering, the man walked between the rows of chairs in the church. And then came towards me. He looked at me and saw I was wearing liturgical clothes.  Suddenly, he stopped. Maybe he thought that this is God's house …”
"I thought, maybe that person would undo his intention and wouldn’t attack me and the people. However, my guess was wrong: he twice hit me on the back, and once hit my head with the sword." Two churchgoers and a police officers were also wounded. The attacker was shot in the stomach.
Father Prier was hospitalized for four days because of his head injury. Looking back at the incident, he says: "I am not afraid, nor do I get angry. A shepherd cannot run away from his sheep."
"A person can sometimes be afraid of being possessed by a bad spirit, but if he or she remains calm, the Holy Spirit will offer protection. I am not angry with the perpetrator. I forgive him. Suppose I met him and he apologized, I would say, 'No, say nothing, I forgive you.’”
"In the Lord's Prayer that Jesus taught His disciples, Jesus asked them to forgive the guilty one. The Lord's Prayer must be implemented, which means the culprit is not repaid in kind. As to the people, I told them not to be afraid. Like I'm not afraid, either."
Two weeks after the incident, Archbishop Robertus Rubiyatmoko of Semarang Msgr. Robertus  presided at Mass at St. Lidwina’s Catholic Church. Father Prier was among 20 priests concelebrating.
Meanwhile, a prominent Muslim leader, Mohamad Syafii Maarif, expressed his disappointment over this incident. He met with the archbishop shortly after the attack.
"We are very grateful for Syafii’s presence so spontaneously, quickly and responsively at that time; it really calmed everything down. The people are calm and not provoked, but there is a growing sense of brotherhood and solidarity,” Archbishop Rubiyatmoko said.