Saudi Arabia Beats Illegal Migrants Before Sending Them Back… 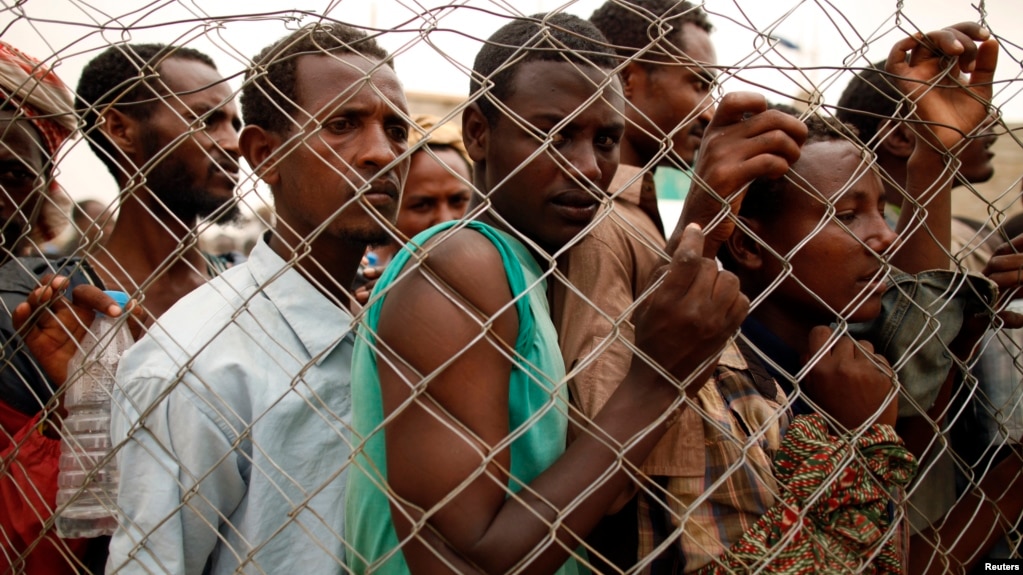 Undocumented Ethiopian migrants who are being forcibly deported from Saudi Arabia by the thousands in a new crackdown say they were mistreated by authorities while detained.
In interviews with The Associated Press upon their arrival home, the returnees described beatings, theft and stays in dirty prison camps. Their accounts brought to light one of the world’s busiest and most dangerous migrant routes but one that remains overlooked amid the larger rush toward Europe.
Saudi Arabia, like other rich Gulf nations, is a magnet for hundreds of thousands of people from impoverished East African nations like Ethiopia and Somalia. They pay traffickers for rides in boats across the narrow waters to Yemen, where they make their way by land through a war zone.
In August, traffickers heaved scores of migrants into the sea off Yemen, leaving more than 50 to drown. In March, more than 30 Somali migrants, including children, were killed - apparently in a helicopter gunship attack by a Saudi-led coalition at war in Yemen.
More than 111,500 migrants landed on Yemen’s shores last year, up from around 100,000 the year before, according to the Regional Mixed Migration Secretariat. Those who make it to Saudi Arabia often find employment as domestic workers and farm workers, sending money to support families back home.
Saudi Arabia’s latest wave of deportations began Nov. 11 after several months of warnings by the government. Saudi authorities say the kingdom has detained around 250,000 people violating its residency laws in the crackdown, with approximately 50,000 already forcibly flown out of the country.
Of those who entered the country illegally, 72 percent were from Yemen and 26 percent were Ethiopians.
Human rights
Those arriving home in Ethiopia described the process as jarring and unfair. The six who spoke to the AP at the airport in the capital, Addis Ababa, said they were robbed of their possessions by “Saudi police officers” who shared their money between them. Some of the returnees said they saw compatriots being shot and wounded when they tried to escape police roundups.
“The prison cell I was put into was so dirty that some of us were severely sick. It was like a toilet,” said Sadiq Ahmed, a former teacher who went to Saudi Arabia five years ago and was detained for 11 days before his deportation. “As if this was not enough, we were robbed of our belongings. I came here with nothing. I know lots of people who went insane because of this torment.”
Human Rights Watch researcher Adam Coogle said that in interviews with dozens of Yemeni migrants in a previous Saudi crackdown in 2014, many “described serious abuses during the process of detention and deportation, including attacks by security forces.” The rights group has not documented the current campaign, he said.
Saudi authorities did not respond to requests for comment.
Ethiopia’s government says more than 14,000 of its citizens have been deported since mid-November and 70,000 have returned voluntarily, but the International Organization Migration says the number that has left forcibly or voluntarily since the amnesty period ended in June has reached 96,000.
Saudi Arabia ordered all undocumented migrants to leave voluntarily in March, an order later extended until June. The majority of the migrants chose to remain and now face forced deportation.
“I stayed in Saudi Arabia for five years just to support my family and other siblings,” said deportee Fozia Omar, adding that she spent one month in prison but was allowed to bring her luggage. “We have suffered a lot. I would like to beg my brothers and sisters not to repeat the mistake we already made, in the name of Allah.”
An estimated 400,000 Ethiopian migrants had been living in Saudi Arabia.
“The number of returnees could rise even higher in the coming weeks,” the IOM said, adding that around $30 million is needed to cover their immediate needs. Those include transportation to final destinations for many of the most vulnerable such as unaccompanied minors, single mothers and those who said they had been abused.
The spokesman for Ethiopia’s ministry of foreign affairs, Meles Alem, said the government continues to work with Saudi officials to safely bring citizens home.