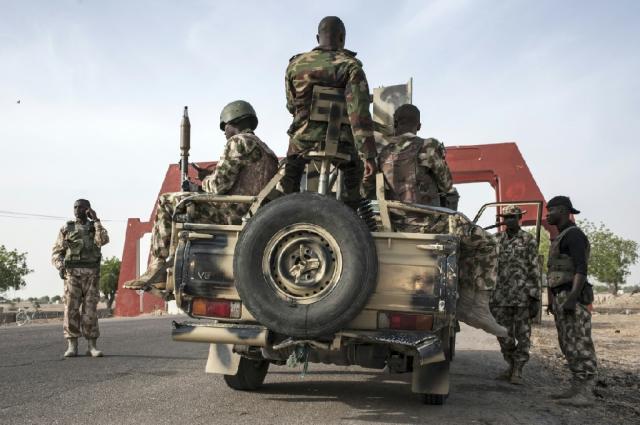 Warri (Nigeria) (AFP) - At least 11 worshippers were shot dead at a church in southeast Nigeria on Sunday, with authorities suggesting the bloodshed was due to a local feud.
Nigerian President Muhammadu Buhari condemned the attack, describing the incident as "an appalling crime against humanity and unspeakable sacrilege," his office said.
Buhari said "there was no justification whatsoever to target church worshippers and kill them in cold blood."
At around 6:00 am (0500 GMT) at least one gunman opened fire at Saint Philip's church in Ozubulu, near the city of Onitsha, unleashing terror on the congregation.
Chukwuma Emeka said he had just stepped out of the church to stretch his legs "when I heard gunshots and screaming and people running inside."
"When the chaos subsided I went inside, I saw my fellow church members dead in a pool of their own blood and many others were screaming in pain."
Attacks on churches are rare in southern Nigeria, where there is a predominantly Christian population.
The country's mainly-Muslim north has been gripped by a violent campaign by Boko Haram jihadists, who specialise in targeting religious centres.
There were varying accounts of what happened in Ozubulu. Witnesses said five gunmen in masks stormed the church, but police said the killing was the work of a lone shooter.
"So far, 12 persons have been confirmed dead and deposited in the mortuary here," a worker at Nnamdi Azikwe University Teaching Hospital told AFP.
Garba Umar, Anambra State police Commissioner, later said 11 people were killed while 18 were injured as a result of the shooting.
Several worshippers with gunshot wounds were also receiving treatment at the hospital, the source said. Witnesses said they feared that up to 20 people may have died.
- 'Feud' -
Umar said the attacker was a gunman who "went on a shooting spree, killing and wounding" worshippers.
He said the violence was the result of a failed murder attempt, tied to a feud within the local community.
"The information at the disposal of the police is that the gunman had been hired to kill a particular family person believed to be among the worshippers," he said.
He said the governor of the state visited the scene and promised to pay the medical bills of the injured.
Local rights activist Emeka Umeagbalasi said his information about the motive largely concurred with that of the police version.
The gunmen had gone to kill the son of a local chief but failed to find him at his home, Umeagbalasi said.
The attackers then went to the church to hunt for him, but could not find the intended target and became angry, he said.
They opened "fire on parishioners and shot indiscriminately," he said, adding that the father of the intended target was shot and wounded.
Speaker of Nigeria's House of Representatives Yakubu Dogara called the attack "barbaric... the height of wickedness."
He extended his condolences to families of the victims, assuring them that the government would do everything within its power to track down those responsible.
Hundreds of churches and mosques in Nigeria's north have been attacked since 2009 when Boko Haram began a violent campaign to impose strict Islamic law.
The rebellion has killed at least 20,000 people and forced some 2.6 million others to flee their homes, sparking a dire humanitarian crisis in the northeast.
at August 07, 2017