Pastor in Iran freed after six years in prison. Behnam Irani, who led several Muslims to Christ says: "I have the joy of the Holy Spirit”. 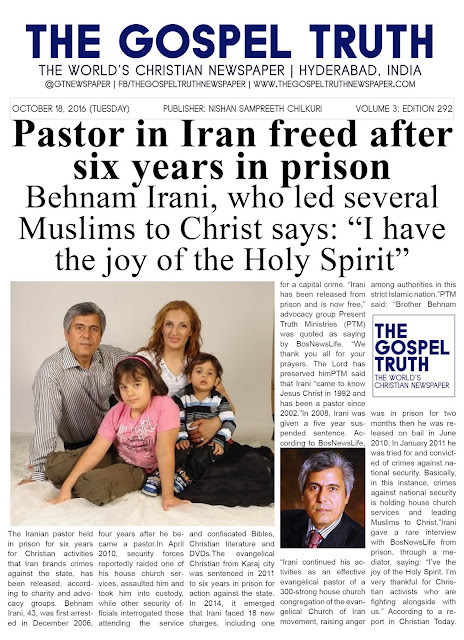 Pastor in Iran freed after six years in prison.

Behnam Irani, who led several Muslims to Christ says: "I have the joy of the Holy Spirit”.

The Iranian pastor held in prison for six years for Christian activities that Iran brands crimes against the state, has been released, according to charity and advocacy groups. Behnam Irani, 43, was first arrested in December 2006, four years after he became a pastor.In April 2010, security forces reportedly raided one of his house church services, assaulted him and took him into custody, while other security officials interrogated those attending the service and confiscated Bibles, Christian literature and DVDs.The evangelical Christian from Karaj city was sentenced in 2011 to six years in prison for action against the state. In 2014, it emerged that Irani faced 18 new charges, including one for a capital crime. "Irani has been released from prison and is now free," advocacy group Present Truth Ministries (PTM) was quoted as saying by BosNewsLife. "We thank you all for your prayers. The Lord has preserved himPTM said that Irani "came to know Jesus Christ in 1992 and has been a pastor since 2002."In 2008, Irani was given a five year suspended sentence. According to BosNewsLife, "Irani continued his activities as an effective evangelical pastor of a 300-strong house church congregation of the evangelical Church of Iran movement, raising anger among authorities in this strict Islamic nation."PTM said: "Brother Behnam was in prison for two months then he was released on bail in June 2010. In January 2011 he was tried for and convicted of crimes against national security. Basically, in this instance, crimes against national security is holding house church services and leading Muslims to Christ."Irani gave a rare interview with BosNewsLife from prison, through a mediator, saying: "I've the joy of the Holy Spirit. I'm very thankful for Christian activists who are fighting alongside with us." According to a report in Christian Today.
at October 24, 2016