Palestinian Muslim gives his life to Jesus. Taysir Abu Saada is now on a mission to preach the gospel to Muslims and Jews. 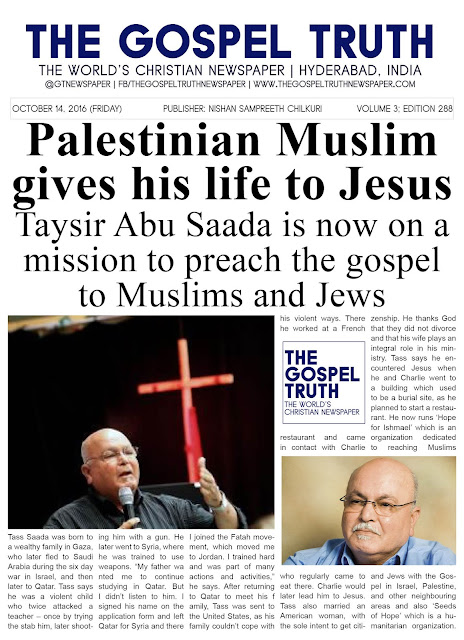 Taysir Abu Saada is now on a mission to preach the gospel to Muslims and Jews.

Tass Saada was born to a wealthy family in Gaza, who later fled to Saudi Arabia during the six day war in Israel, and then later to Qatar. Tass says he was a violent child who twice attacked a teacher – once by trying the stab him, later shooting him with a gun. He later went to Syria, where he was trained to use weapons. “My father wanted me to continue studying in Qatar. But I didn’t listen to him. I signed his name on the application form and left Qatar for Syria and there I joined the Fatah movement, which moved me to Jordan. I trained hard and was part of many actions and activities,” he says. After returning to Qatar to meet his family, Tass was sent to the United States, as his family couldn’t cope with his violent ways. There he worked at a French restaurant and came in contact with Charlie who regularly came to eat there. Charlie would later lead him to Jesus. Tass also married an American woman, with the sole intent to get citizenship. He thanks God that they did not divorce and that his wife plays an integral role in his ministry. Tass says he encountered Jesus when he and Charlie went to a building which used to be a burial site, as he planned to start a restaurant. He now runs ‘Hope for Ishmael’ which is an organization dedicated to reaching Muslims and Jews with the Gospel in Israel, Palestine, and other neighboring areas and also ‘Seeds of Hope’ which is a humanitarian organization.
at October 24, 2016