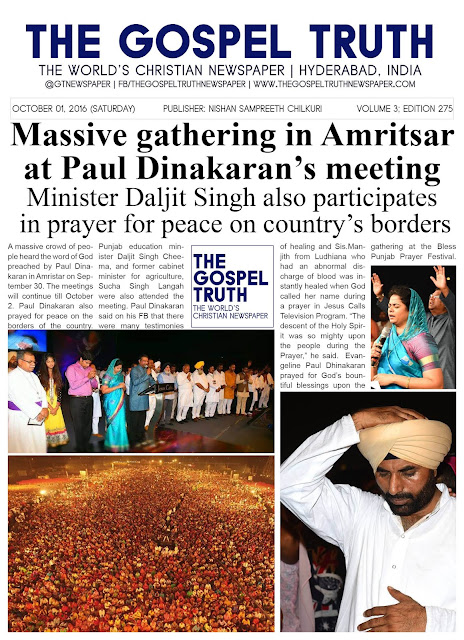 A massive crowd of people heard the word of God preached by Paul Dinakaran in Amristar on September 30. The meetings will continue till October 2. Paul Dinakaran also prayed for peace on the borders of the country. Punjab education minister Daljit Singh Cheema, and former cabinet minister for agriculture, Sucha Singh Langah were also attended the meeting. Paul Dinakaran said on his FB that there were many testimonies of healing and Sis.Manjith from Ludhiana who had an abnormal discharge of blood was instantly healed when God called her name during a prayer in Jesus Calls Television Program. “The descent of the Holy Spirit was so mighty upon the people during the Prayer,” he said.  Evangeline Paul Dhinakaran prayed for God's bountiful blessings upon the gathering at the Bless Punjab Prayer Festival.
at October 24, 2016