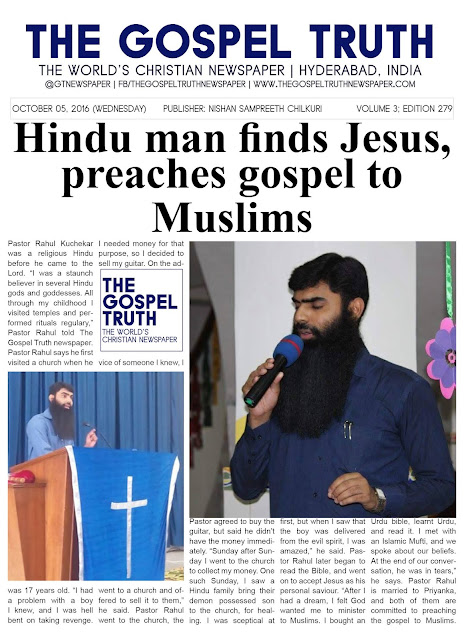 Pastor Rahul Kuchekar was a religious Hindu before he came to the Lord. “I was a staunch believer in several Hindu gods and goddesses. All through my childhood I visited temples and performed rituals regulary,” Pastor Rahul told The Gospel Truth newspaper. Pastor Rahul says he first visited a church when he was 17 years old. “I had a problem with a boy I knew, and I was hell bent on taking revenge. I needed money for that purpose, so I decided to sell my guitar. On the advice of someone I knew, I went to a church and offered to sell it to them,” he said. Pastor Rahul went to the church, the Pastor agreed to buy the guitar, but said he didn’t have the money immediately. “Sunday after Sunday I went to the church to collect my money. One such Sunday, I saw a Hindu family bring their demon possessed son to the church, for healing. I was sceptical at first, but when I saw that the boy was delivered from the evil spirit, I was amazed,” he said. Pastor Rahul later began to read the Bible, and went on to accept Jesus as his personal saviour. “After I had a dream, I felt God wanted me to minister to Muslims. I bought an Urdu bible, learnt Urdu, and read it. I met with an Islamic Mufti, and we spoke about our beliefs. At the end of our conversation, he was in tears,” he says. Pastor Rahul is married to Priyanka, and both of them are committed to preaching the gospel to Muslims.
at October 24, 2016