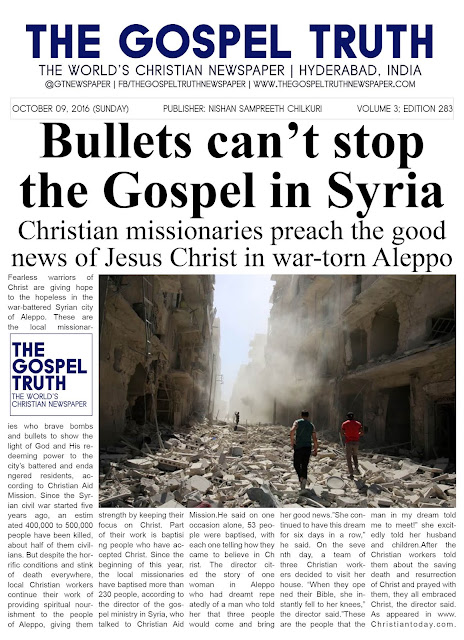 Christian missionaries preach the good news of Jesus Christ in war-torn Aleppo.
Fearless warriors of Christ are giving hope to the hopeless in the war-battered Syrian city of Aleppo. These are the local missionaries who brave bombs and bullets to show the light of God and His redeeming power to the city's battered and endangered residents, according to Christian Aid Mission. Since the Syrian civil war started five years ago, an estimated 400,000 to 500,000 people have been killed, about half of them civilians. But despite the horrific conditions and stink of death everywhere, local Christian workers continue their work of providing spiritual nourishment to the people of Aleppo, giving them strength by keeping their focus on Christ. Part of their work is baptising people who have accepted Christ. Since the beginning of this year, the local missionaries have baptised more than 230 people, according to the director of the gospel ministry in Syria, who talked to Christian Aid Mission.He said on one occasion alone, 53 people were baptised, with each one telling how they came to believe in Christ. The director cited the story of one woman in Aleppo who had dreamt repeatedly of a man who told her that three people would come and bring her good news."She continued to have this dream for six days in a row," he said. On the seventh day, a team of three Christian workers decided to visit her house. "When they opened their Bible, she instantly fell to her knees," the director said."These are the people that the man in my dream told me to meet!" she excitedly told her husband and children.After the Christian workers told them about the saving death and resurrection of Christ and prayed with them, they all embraced Christ, the director said. As appeared in www.Christiantoday.com.
at October 24, 2016