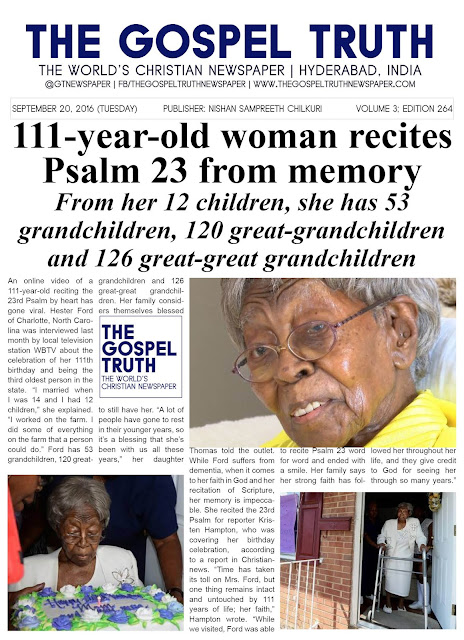 An online video of a 111-year-old reciting the 23rd Psalm by heart has gone viral. Hester Ford of Charlotte, North Carolina was interviewed last month by local television station WBTV about the celebration of her 111th birthday and being the third oldest person in the state. “I married when I was 14 and I had 12 children,” she explained. “I worked on the farm. I did some of everything on the farm that a person could do.” Ford has 53 grandchildren, 120 great-grandchildren and 126 great-great grandchildren. Her family considers themselves blessed to still have her. “A lot of people have gone to rest in their younger years, so it’s a blessing that she’s been with us all these years,” her daughter Thomas told the outlet. While Ford suffers from dementia, when it comes to her faith in God and her recitation of Scripture, her memory is impeccable. She recited the 23rd Psalm for reporter Kristen Hampton, who was covering her birthday celebration, according to a report in Christiannews. “Time has taken its toll on Mrs. Ford, but one thing remains intact and untouched by 111 years of life; her faith,” Hampton wrote. “While we visited, Ford was able to recite Psalm 23 word for word and ended with a smile. Her family says her strong faith has followed her throughout her life, and they give credit to God for seeing her through so many years.”
at October 24, 2016