Yeshu Masih is the only way to ‘Moksh’. Acharya Vikas Massey explains the clear gospel in Ludhiana at meeting organized by Pastor Salim Khan. 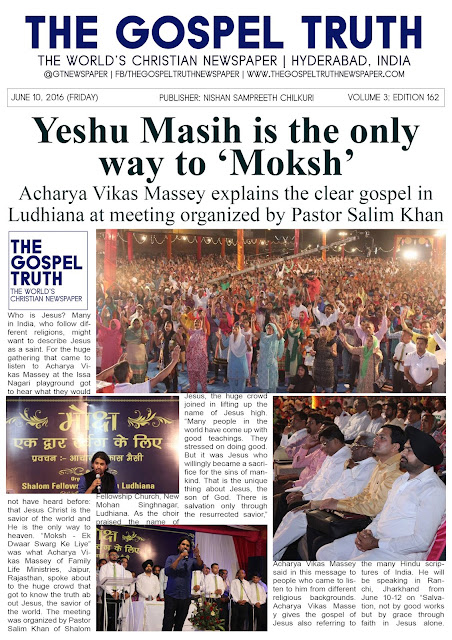 Christina Grimmie’s tweet: “Don’t stop trusting God”
Church mourns the singer who was shot dead in Orlanado
Members of Fellowship Alliance Chapel were gathering to mourn Christina Grimmie when they were learning of 50 more people shot to death by another madman in Orlando, Florida. Grimmie, 22, was shot Friday night in Orlando while signing autographs after a concert. Kevin James Loibl, 27, fired at Grimmie before he was tackled by her brother Marcus. Loibl killed himself. Grimmie, a budding vocal star and a popular contestant on NBC’sThe Voice, was rushed to a hospital, where she was pronounced dead.  “We as a family, we mourn. We mourn Orlando this morning, which is going through a lot today, again,” said elder Bryan Russell, as congregants took their seats for the 11 a.m. service in the church Grimmie attended for most of her life. “It’s hard and it hurts and it seems senseless. Right now is a time for us to be able to grieve and ask questions.” Two hours earlier, Pastor Marty Berglund began the early service with a video tribute to Grimmie. Two large screens above the church sanctuary played a YouTube video of Grimmie belting out the song “In Christ Alone.” (The video has been watched more than 2 million times.) The song’s lyrics—which speak of the power of faith to conquer death—moved many of the congregants to tears. “When something happens like Christina Grimmie getting shot by a murderer, we have to remember that we are part of an unshakeable kingdom that Christina sang about… this is the faith Christina Grimmie had,” Berglund said as ushers passed boxes of tissues around.  A church greeter, Ed Letts, said he hopes some good might come of the tragedy. “We are people of faith, so as we see it, Christina now stands with Christ,” he said. “Knowing that in our hearts brings peace, and maybe through her videos she can now get that message out.”