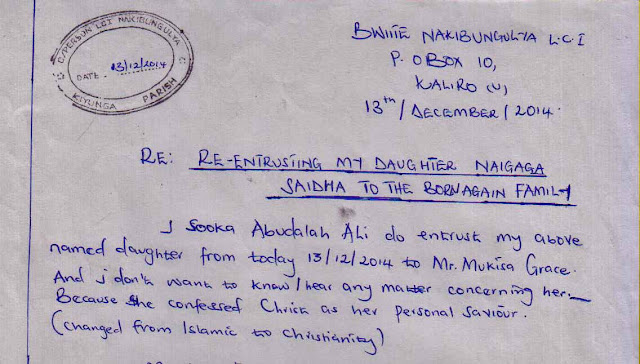 Muhammad said: “Whoever changed his Islamic religion, then kill him” (Bukhari 9.84.57). The death penalty for apostasy is part of Islamic law according to all the schools of Islamic jurisprudence. This is still the position of all the schools of Islamic jurisprudence, both Sunni and Shi’ite. Sheikh Yusuf al-Qaradawi, the most renowned and prominent Muslim cleric in the world, has stated: “The Muslim jurists are unanimous that apostates must be punished, yet they differ as to determining the kind of punishment to be inflicted upon them. The majority of them, including the four main schools of jurisprudence (Hanafi, Maliki, Shafi`i, and Hanbali) as well as the other four schools of jurisprudence (the four Shiite schools of Az-Zaidiyyah, Al-Ithna-`ashriyyah, Al-Ja`fariyyah, and Az-Zaheriyyah) agree that apostates must be executed.” There is only disagreement over whether the law applies only to men, or to women also – some authorities hold that apostate women should not be killed, but only imprisoned in their houses until death.


Yet Muslim spokesmen such as Harris Zafar, Mustafa Akyol, Salam al-Marayati, M. Cherif Bassiouni, and Ali Eteraz (among many others) have assured us that Islam doesn’t punish apostasy and condemned those who point out that it does as bigots and “Islamophobes.” So are  Zafar, Akyol, al-Marayati, Bassiouni, and Eteraz on their way to Somalia as we speak, so as to explain to the Muslim clerics who are denouncing Abisaid Abdi Ismail that they are misunderstanders of Islam? Akyol made a reasonably good statement recently; where are the others?
“Imam in Uganda Allegedly Beats Daughter to Death for Converting to Christ,” Morningstar News, January 21, 2015 (thanks to Pamela Geller):

A 12-year-old girl who was hospitalized for two weeks after her Muslim father beat her and her sister for converting to Christ last month is traumatized after learning that her sister died from the assault, sources said.
Naigaga Saidah’s father, Imam Abudalah Ali of Bwita mosque in Kaliro District, allegedly beat to death her 15-year-old sister, Namugonya Jamirah, on Dec. 11 after the sisters put their trust in Christ at a five-day evangelistic event that ended that day. Beaten unconscious, Naigaga did not learn of her sister’s death until a pastor had transferred her to safety in another town on Jan. 7, sources said.
“Saidah needs prayers, trauma counseling and medication for the left side of her hip that was injured by the father,” a source whose name is withheld for security reasons told Morning Star News.
After the Dec. 7-11 evangelistic campaign at Bwita trading center in the Nakibungulya area of Kaliro District, a neighbor told Ali that his daughters had become Christians, sources said. That afternoon, 17 Muslims arrived at the venue of the evangelistic meeting, but the participants had left, a source said.
“Their father got the information that his daughters have converted, and he organized a small group of fellow Muslims, about 17 people, to go and attack the Christians,” a source said. “He found the campaign had finished but went back to his home and waited for the daughters. When they went back home, the father picked up the club and started beating them badly till one called Jamirah died.”
Saidah managed to escape when her father went inside the house to look for water to splash her back to consciousness, the source said. She arrived limping in blood-stained clothes at a pastor’s house.
The following day the pastor and another Christian leader went to Ali’s home, learned that Jamirah was dead and reported it to police. Officers arrived at Ali’s house on Dec. 12 and arrested him. He was charged with murder but denied it, claiming that Jamirah died from a motorcycle accident.
His wife and two sons supported his statement, and Ali was released on bail on Dec. 13. The same day, Ali officially disowned Saidah for leaving Islam for Christianity before a Kaliro Local Council official.
Saidah described her ordeal to Morning Star News by phone.
“My father took us to the house and then locked the house,” she said. “He questioned us why we attended a Christian meeting and started beating us up with a club. My sister was hit on the forehead and fell down. I tried to hide myself in the bed, but he got me out and began beating me up as my sister lay down bleeding.”
Saidah began shouting for help, but her father covered her mouth with such force that she nearly suffocated, she said. She fell down, unconscious.
“Later on I realized that my clothes were soaked with water as I regained my consciousness, and my father had left,” she said. “I got up and went to the pastor’s house, which is about 30 minutes’ walk. I arrived there at 7 p.m.”
The pastor took her to a medical clinic, where she was treated for two weeks, while her father began organizing area Muslims to kill her, sources said. The pastor sent her to a Christian leader in another undisclosed town on Jan. 7. When Saidah learned then that her sister had died, she fainted and remained another two days in a nearby hospital.
“The police were later bribed and accepted the words of Ali, and he was released on bail,” one source said. “When he came home he went to the [local] chairman and said that he had disowned Saidah, and that if she tries to go back that she will be killed just like her sister, and that he is leaving Saidah in the hands of born-again Christians.”
The chairman summoned the Christian leaders and informed them of what Ali had told him. They told Ali to put his decision to disown her in writing.
“Saidah has been traumatized, is still limping and she is in a need of the prayers, counseling, medical support, and school fees, because she is going to primary seventh grade this year,” https://www.jihadwatch.org/2015/01/uganda-imam-allegedly-beats-12-year-old-daughter-to-death-for-converting-to-christianityhe said.